Update September 2011: This story is getting a lot of traffic for the new Jensen Interceptor being built by CPP, and due in 2014. You can read about the new Interceptor by CPP here, as well as seeing what the Jensen SX – based on an original donor Interceptor – is all about below.

The Interceptor SX is the Jensen brought in to the 21st century. Still based on a donor Interceptor, V Eight Ltd (based at  Cropredy Bridge) transform the 60/70s supercar in to a true supercar of today.

A transformation in performance and handling, thanks to GM 6.2 litre supercharged V8 LS9 engine delivering 620bhp, carbon ceramic brakes and fully adjustable suspension, makes the Interceptor SX capable of taking on any GT on the market today, but with all the style and panache the original Interceptor had.

V Eight have managed to bring the Interceptors shape completely up to date, whilst still retaining the original style. Not only that, but they’ve managed to make the 2+2 accommodation of the original more spacious, whilst retaining all the charm and character.

And we can exclusively reveal that the first 5 customers to place their £30k deposit (the Jensen Interceptor SX costs £151,000) will join an exclusive club, offering a unique SX Club ‘Graham’ Watch, free servicing for life, an individual build book and a bespoke briefcase or travel bag in leather to match their car’s trim. But that list of 5 is going fast!

Full details of the Jensen Interceptor SX below, and look out for our test drive once the first car is ready!

Jensen Sales Ltd in conjunction with V Eight Ltd at Cropredy Bridge is delighted to announce the next generation Jensen Interceptor.

Following the success of the Interceptor S, V Eight has taken the proven platform of the S and applied an altogether more radical approach to the design of this vehicle (known as project SX). With a lightened and restyled bodyshell and powered by the General Motors 6.2 litre supercharged V8 LS9 engine, the SX boasts 620 bhp, driving through a manual 6 speed transmission to a fully independent rear axle. Carbon ceramic 6/4 piston brakes are enclosed in 19 inch carbon fibre & magnesium wheels and sit on fully adjustable suspension.

With a 35 year history in the marque at Cropredy Bridge, V Eight has led the way in Jensen maintenance, restoration and repair. That experience has all been brought to bear in designing the SX which, although unmistakably ‘Interceptor Retro’ in origin, is extensively modernised in outward appearance, interior accommodation (now a more usable 2+2) and driving dynamics, with the performance and reliability of a modern vehicle. 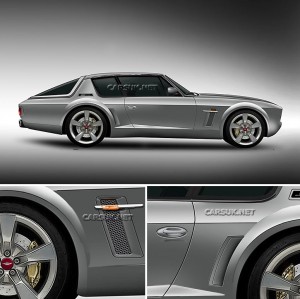 “We believe that the SX [project] is the ultimate Jensen Interceptor” says Alan Garnett, Managing Director. “It provides a rare and ultra exclusive opportunity to own a genuine Gran Tourismo with stunning looks and performance.” Technical Director David Duerden adds “…that it embodies the best of British design and engineering heritage and delivers it with a hammer blow to the senses is an added bonus.”

The Interceptor SX is hand built from a classic 1970s Mk III Interceptor that is stripped to bare metal prior to being fully renovated and modified. Before new composite and aluminium panels are fitted and the body painted to the customer’s chosen colour, the steel shell is EPD dipped to modern industry standard for corrosion protection.
The interior is designed to reflect the overall effect of the car; stunning but purposeful and is a combination of leather, wood and aluminium, providing all the sophistication one would expect for a vehicle designed for serious GT motoring whilst providing a generous 2+2 seating layout.

Engine, transmission, suspension and brakes are all brand new including many original equipment supplier parts to 2009 specification, in addition to the many bespoke components unique to the SX. All engine management functions are ECU controlled and the wiring harness and ancillaries are assembled to modern standards.

The Jenson SX is still a real Interceptor

The carbon fibre & magnesium wheels are UK produced and represent the state of the art; they also symbolise the level of technology and style embodied in the SX that elevate the threshold of exclusivity.

The Interceptor SX will be built in limited numbers, exclusively only to order and whilst there will be a common outline specification, it is anticipated that each SX will be a bespoke build reflecting each customers particular tastes and requirements.

The base price is £151,000 and variations will be priced individually.

All vehicles will be built at the company’s site at Cropredy Bridge, just outside Banbury with local subcontractors and suppliers where possible from UK. Individual build programmes and timescales will be discussed with each client but it must be assumed that from its start, an SX will take about four months to build.