A review of the new Alfa Romeo MiTo, Alfa’s first offering in the competitive Super Mini sector since the Alfasud.

A new Alfa Romeo is always an event. We don’t feel as strongly about Alfas as the TG crew (you can be a real petrol-head without ever having owned an Alfa) but we certainly understand the sentiment.

Alfas have always had a certain something. Many would call it soul, and that’s probably a good description. There is so much that brings joy to a car lover in an Alfa. Gorgeous lines; beautiful engines; wonderful detail touches, and of course a real sense of heritage.

But these sentiments are not enough to make most people buy a car, particularly at the moment with the world in financial turmoil, so Alfa Romeo needs to bring more to the party than soul and style.

The new MiTo has a good lineage – back to the Alfasud. The Alfasud was a joy to drive, but it fell apart before your eyes. That doesn’t look to be an issue with modern Alfas, but how does it stack up against its rivals?

Based on the underpinnings of the Fiat Grande Punto (which is not a bad start) its styling echoes the achingly beautiful Alfa Romeo 8C Competizione (although we’re not trying to tell you that this pint-sized Alfa is in an way a supercar!), and there is no doubt that this is an Alfa through and through, despite its shared components (and its name, which was chosen by the winner of a German Car Magazine competition!).

Sadly, quality has never been an Alfa strong point. To make matters worse, their dealer network is pretty poor, despite ongoing claims by Alfa that the problems are being sorted. Still, if the car is reliable, and the service intervals longs (18,000 miles for the MiTo) then they can get away with a less than glowing service network.

The MiTo does seem to be pretty well bolted together. The panel fit is good, and the plastics in the interior look and feel to be quality. 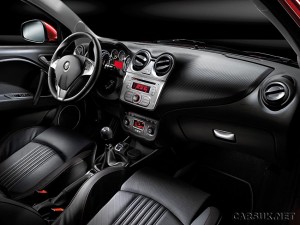 A whole raft of electronic gizmos control much of the Alfa’s ride and handling, from its DNA System, which can be selected as Normal, All-Weather or Dynamic (and does a very good job of setting the car up for the purpose you want), stability control, computerised brake-force distribution and an electronic diff. It all sounds great, and works well, but Italians and electrics….

But if it all keeps working, the Alfa Romeo MiTo is a nice place to be. Alfa thinks one of its big targets are down-sizers, and if that’s the case they will appreciate some of the thought that’s gone in to the interior.

Noise levels are very well controlled and the optional leather seats could easily grace a much more expensive car without looking out of place. The boot is a bit thin and high, and the seats don’t fold down fully, but you can get a reasonable amount of stuff in – just not easily. The front is a good place to be, but the back is cramped – nowhere near as roomy as others in this class – and headroom is at a premium.

But even the entry-level Turismo gets AirCon and the DNA System, and you get more toys as you go up the range to the Lusso and Veloce. There’s a good range of options including Bose, Climate and a Panoramic roof, plus a choice of 10 colours. You can make this Alfa very special – if you’re prepared to spend.

This is where you would expect a small Alfa, with the lineage of the Alfasud, to excel, and it really doesn’t disappoint too much.

The electronic stuff works very well, on the whole. The DNA System in particular wakes the car up with a big shot of Red Bull if you select Dynamic. It’s one of the best systems we’ve come across, particularly in a car at this price. 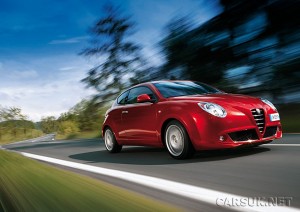 The DST (Dynamic Steering Torque) should be good but Alfa hasn’t quite got it right (has anyone?). Its aim is to control the steering and mitigate the effects of torque-steer. But it feels too vague. Too much interference. The car feels too light at the nose, and its hard to know where you’re pointing.

But the brakes are very good (remarkably good) and the MiTo is a very well balanced car. It feels like it has a low centre of gravity, and its clever suspension (aided by all the gizmos) flatters your driving and almost eliminates body roll. A good set-up.

Power and performance vary across the range, from a fairly pedestrian performance in the diesels to a pretty good charge (0-60 in 8 seconds and 135mph) in the 1.4 petrol turbo. But they are all, on balance, good to drive. But the steering does take some getting used to, if you ever do.

You will pay more for a MiTo than a lot of its competition. But as long as the reliability is good, it should hold its value well. There is a lot of equipment in even the standard spec, but if you start to load the MiTo with big chunks from the options list you will never see your money back (although it will make it easier to sell!). 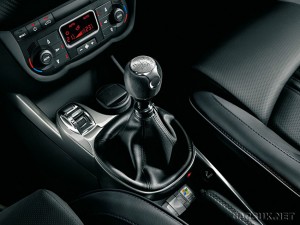 And as a good alternative to something like a Fiat 500 (which is a bit too cutesy) and the Mini (which is just too common now) the MiTo could well end up being a very desirable car both new and used, so values should stay high (not something you get very often with an Alfa).

Pick of the bunch is the 1.4 Petrol Turbo, which will still give you 43.5mpg and emissions of 155g/km (the non-turbo version only manages a couple of mpg better, so as long as you’re not too heavy footed all the time you won’t see much difference in fuel costs).

There’s a 1.25 Diesel option and a 1.6 JTD, both of which are more economical than the petrol versions if you’re looking for out and out economy.

In many ways, this is Alfa Romeo’s best car for a very long time. It is pretty well bolted together, very stylish and has more kudos than most cars in this sector.

The performance and handling across the range are good (very good in the 1.4 Turbo), and the standard equipment, even on the Turismo, is enough to keep most drivers happy.

The only caveats are the steering and the long-term reliability. There is so much dependence on the electronics to make the MiTo what its is, that if they start to be temperamental then the MiTo is in trouble. But let’s give it the benefit of the doubt. They work very well and make the MiTo a very strong contender.

I’m sure with time you would get used to the steering. It just has very little feel, and feels ‘dis-connected’. But it’s a fairly minor gripe overall.

On balance, this is potentially one of the best cars in its sector. If you love cars, and can ignore a few foibles, then you won’t be disappointed by the MiTo. In fact, you’ll relish it. But if you’re looking for staid and predictable, look elsewhere.