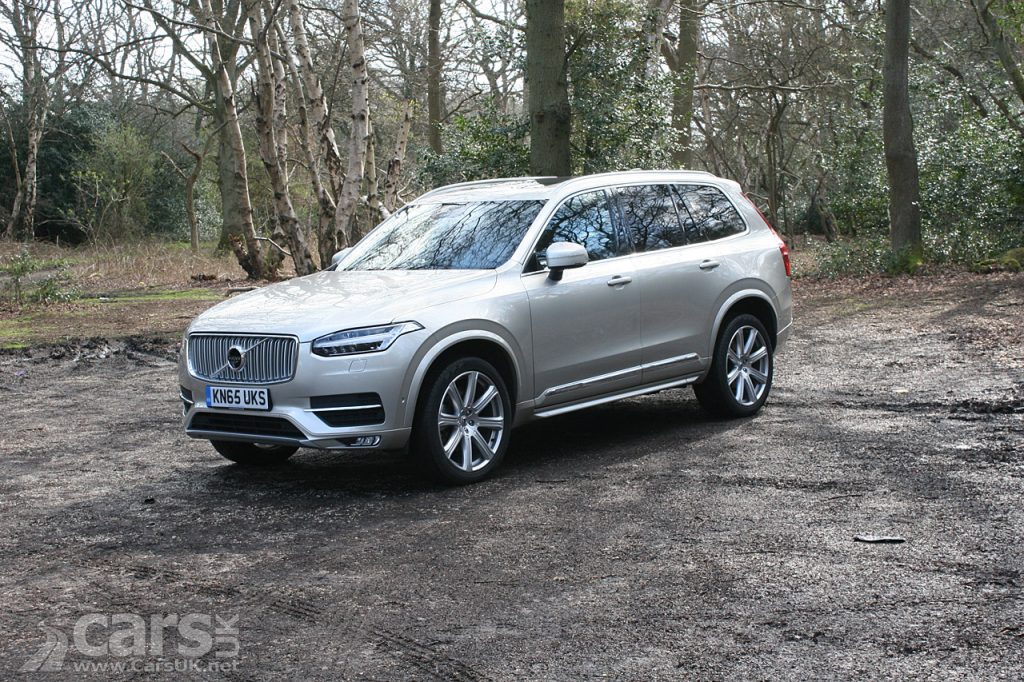 This week we’ve had the 2016 Volvo XC90 in for review, this time the petrol-engined T6 in Inscription trim. Is the petrol XC90 worth considering?

But Volvo isn’t just offering a diesel-engined XC90, there’s also the option of a petrol-engined T6 and a plug-in electric hybrid T8 Twin Engine to encourage buyers in to Volvo’s SUV.

Just like the D5, the petrol engine in the T6 and T8 are just 2.0 litres in size, but they do get both turbo-charging and supercharging to extract 316bhp and 295lb/ft of torque, a significant rise of 94bhp on the D5, but a loss of almost 50lb/ft of torque too.

On paper, the T6 XC90 offers decent performance (0-62mph in 6.5 seconds) and economy that’s the better of anything comparable with a petrol engine (official economy is 35.3mpg).

But, in the real world, does the T6 XC90 offer a better alternative to the diesel, and which Volvo XC90 is best?

We eulogised what Volvo has done with new XC90 – inside and out – when we reviewed the D5, and nothing has changed our minds after another week with Volvo’s big SUV.

Yes, the XC90 is a whopping great big SUV by any standards, but the clever design with rounded edges, clever detailing and smooth surfaces disguises the bulk of the XC90 so well you don’t realise how big it is until you get up close.

Nice details like the ‘Thor’ running lights, imposing grille, tall rear tail lights and integrated exhaust tips make the XC90 cohesive and non-threatening and, although it’s not a ‘pretty’ car (what SUV is?), the XC90 is appealing, handsome and imposing.

“We eulogised what Volvo has done with both the design of the new XC90 – inside and out – when we reviewed the D5, and nothing has changed our minds after another week with Volvo’s big SUV”

But it’s the simple and very upmarket interior that’s an even bigger appeal than the imposing, but still very human, exterior design.

The interior is ergonomically brilliant, from the hugely intuitive big tablet touchscreen in the centre that gives easy access to everything you need (and takes the button count way down), to the extremely comfortable seats in all three rows which offer ample leg, headroom and support (although it’s best if you’re under 5′ 8″ in the very back row), easy access to even the back row, simple and intuitive steering wheel controls and plenty of storage space for both bits and bobs and luggage, even with all the seats in place.

Volvo has added a raft of optional extras to the review car (details below), but there are extras that we didn’t experience on the last XC90 we had, particularly the Xenium Pack (£2,000).

XC90 T6 Performance and on the road 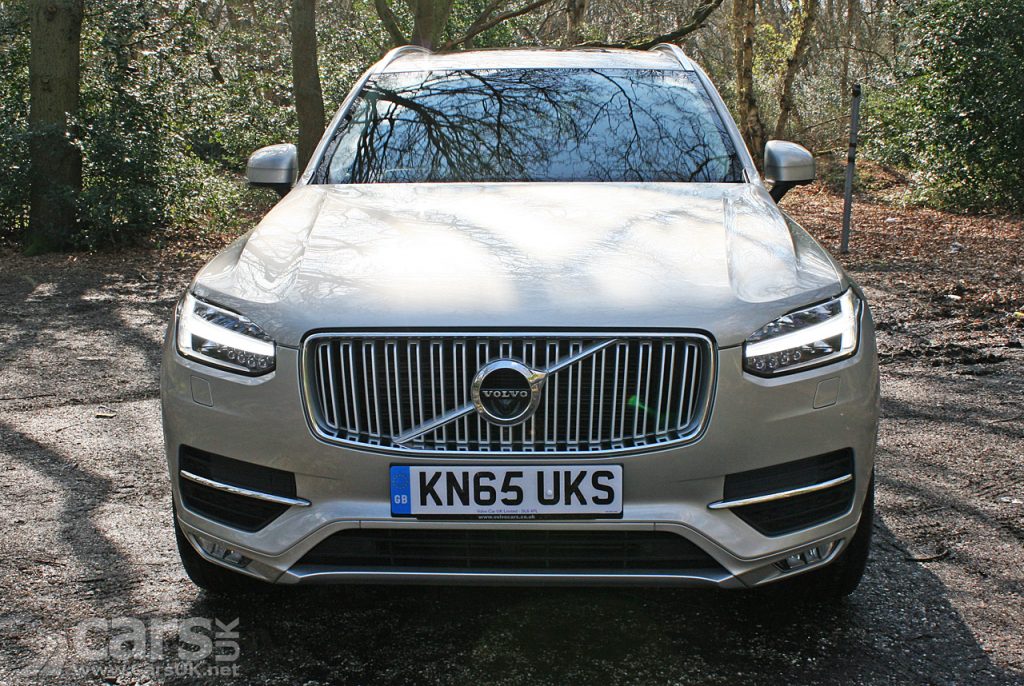 If we hadn’t already driven the diesel XC90 at some length, we’d have concluded the petrol-engined XC90 practically perfect. But there are differences.

Volvo has fitted this car with 21″ wheels, and although the ride is still extraordinarily comfortable the bigger wheels do pitter-patter more than the regular 20″ wheels we had on the D5,

The extra noise is hardly intrusive, but the XC90 does seem to ride better on the 20″ wheels, and we really couldn’t discern any extra grip so, for our money, we’d stick with the regular 20″ option.

When it comes the the T6’s petrol engine, it’s as impressive as the D5 diesel, and it’s hard to believe you can get so much get up and go out of a 2.0 litre engine driving a great big SUV.

“…in something the size of the XC90, torque is arguably more important than outright power, and the lower torque of the T6 does mean the gearbox is busier looking for the right ratio at times”

But in something the size of the XC90, torque is arguably more important than outright power, and the lower torque of the T6 does mean the gearbox is busier looking for the right ratio at times, which does upset the equilibrium that was so much a feature of the D5.

The T6 also needs to be working higher up the rev range than the D5, and that means you do spend more time extending the T6’s engine when you want to make progress, and that results in less than stellar economy.

We managed an average over the week of 23.9 mpg – a long way off the official 35mpg – although that’s still a very credible result for a petrol SUV of any size, never mind one the size of the XC90, and we’re pretty sure most owners we get nearer to 30mpg most of the time, and mid to high 30s on a run.

But cruising on a motorway or tickling around town, the T6 is as sublime as the D5 and is still a brilliant drive, and a wonderful place to spend time. 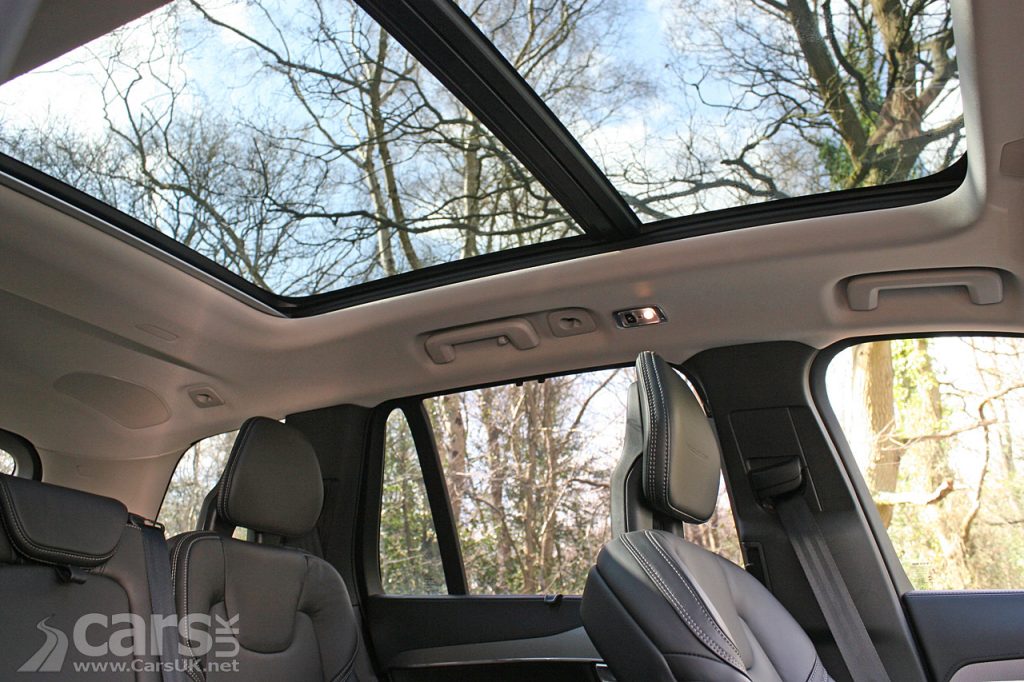 Just like the D5 XC90, the verdict on the T6 is that it’s a perfectly judged SUV for the better-off family, offering a sublime cabin, a comfortable ride, good handling and masses of room.

It’s a car you warm to in a way you just don’t with the German competition, and even with the petrol-engined T6 at £55k (before options) it offers so much for the money.

Much to our surprise – with a distinct predilection at Cars UK for petrol engines – we have to confess we think the D5 XC90 offers a better balance of abilities than the T6.

The D5’s extra torque is much better suited to the XC90’s character than the sometimes busy T6, and its ability to ride its wave of torque makes it a better drive most of the time.

That said, we enjoyed the T6’s ability to hustle more convincingly when the need (or desire) arose, with the extra horses making the T6 notably quicker than the D5 on those occasions.

But, on the whole, the XC90’s strength is delivering a gloriously soothing ride in a brilliant cabin whilst transporting people and stuff – whether that’s up the road or across a continent – and the D5 is just better at that for 90 per cent of the time than the T6.

But if you have an overwhelming aversion to diesel engines, we still consider the XC90 with the T6 petrol engine to be the most rounded, and most appealing, of the premium SUVs on the market.

The XC90 T6 may end up in second place, but it’s second place to its diesel-engined D5 sibling.